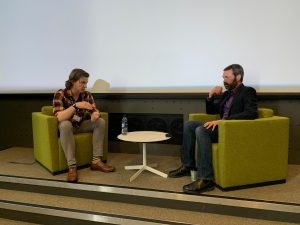 The Creative Media Network Festival took place at BBC Scotland in Glasgow last week with a number of University of Stirling students attending masterclasses in subjects such as Pitching, Health and Safety on Location and Turning your Idea into Reality.
A team from the MSc in Television Development and Production won the pitching competition in the ‘Format’ category with their idea ‘Out of the Woods’ that they presented to a panel from the industry and winning themselves a week of work experience at BBC Scotland.
In addition, Head of Production Teaching, Dario Sinforiani chaired a panel of recent graduates from a variety of further education establishments, so our current students could hear some success stories from people who were in their position a few years ago. One of the panellists was Stirling graduate Mike Trevett who is now an editor at BBC Scotland.
Jamie Hare