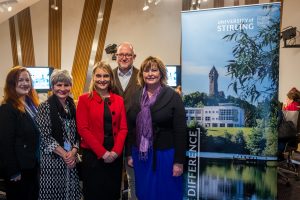 Fiona  Hyslop,  Cabinet  Secretary  for  Culture,  Tourism  and  External  Affairs, addressed  a  pre-conference  reception  at  the  Scottish  Parliament  sponsored by Joan McAlpine MSP as  Stirling University geared up to host the Media Communications and Cultural Studies Association’s first annual conference north of the border.
In her speech she lamented the declining income of printed press, a lack of new media regulation and the misuse of personal information: ‘A free and functioning independent media is the bedrock of a functioning democracy.’
Addressing the conference theme of ‘continuity and change’ she noted: “In terms of change, the biggest challenge facing the UK at this time is the decision to leave the European Union”. With the Scottish Government striving to prevent or at least minimise  the  damage  of  Brexit,  Hyslop  expanded  on  the  importance  of  good communication to a healthy political landscape. “Language matters, and there’s a responsibility for the media to articulate what things actually mean.” She pointed that the Brexit abbreviation is often unhelpful and simplifies the complexity of the UK’s likely departure from the EU. She also pointed out that “No Deal” sounds very much like status quo, rather than referring to crashing out the EU with nothing at all to regulate the relationship: “You have to describe things as they actually are.”
Hyslop praised Scotland’s cosmopolitan media. Critical, independent and brave thinkers  are  required  for  the  future,  she  said,  and  called  on  the  teachers  of tomorrow’s  writers,  journalists,  photographers  and  film  makers  to  foster  and encourage those values.
The  reception  finished  with  a  tour  of the  parliament  and  debate  chamber  by journalist  turned MSP  Joan  McAlpine who hosted the event.  Symbolically  coinciding  with  the  20th anniversary of the reconvening of the Scottish Parliament, the conference’s celebration of Scotland’s increasingly self-confident cultural output was a reminder of how far the country has itself changed and developed.
The MeCCSA2019 pre-conference visit to the Scottish Parliament was a perfect way to start a conference that was held on Stirling University campus from 9-11 January. It was a  reminder  that  what  we  do  has ramifications  beyond  academia, particularly in terms of helping  to  shape  national  and  international narratives at a time when democracy needs bold, brave and insightful voices.
For more information about the MeCCSA 2019 Conference please see:  https://www.stir.ac.uk/meccsa2019
This post was written by Josh Martin and Alex Steven, student in MSc International Journalism