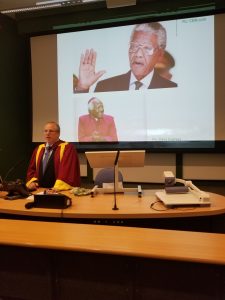 What is the point of a professor? The clue is in the title. Professors are experts in their chosen field, and with that title comes an obligation to share that expertise.
Put simply, professors are meant to profess – to communicate their learning to the wider public, to lead the debate about important issues of the day, and to be prepared to challenge the accepted wisdom.
Professor Adrian Hadland, Head of Communications, Media and Culture, met those challenges head on when he gave his Inaugural Professorial Lecture in the University of Stirling’s Pathfoot Building on November 21. It was introduced by Professor Richard Oram, Dean of Arts and Humanities.
Professor Hadland took as his subject the Future of Journalism and Democracy, and gave a stark overview of the current challenges to democratic freedoms around the globe from greedy, corrupt and tyrannical leaders. And, while not pulling his punches about the frailties of the media, he emphasised the need for a strong and courageous media to continue to ‘talk truth to power’.
Addressing an audience of colleagues, students, family and friends, he invoked the spirit of two of his heroes at the beginning of his lecture: the statesmen Nelson Mandela and Archbishop Desmond Tutu.
Professor Hadland, who has written a biography of Mandela, spoke movingly of a visit to Mandela’s home district. The man who led South Africa to freedom showed his biographer where and how his political beliefs had been forged. It was a place where political decision-making was based on the principle of consensus, and that – Professor Hadland said – informed his world view.
The lecture highlighted the global threats to the freedoms Mandela espoused – and not just in emerging democracies. The United Kingdom, he pointed out, was at No.40 in the list of countries that protected the freedom of the press, and the President of the United States had branded CNN an ‘enemy of the people’.
He talked about the way governments around the world suppressed free speech – the Great Firewall of China, the suppression of freedoms in Russia, and legislation to limit the freedom of journalists to challenge the state.
And he reminded the audience of the personal cost paid by those who promoted freedom of speech. The journalists who had lost their lives covering wars and corruption, and for challenging those who exploited ordinary men and women around the globe.
He ended with optimism that truth would triumph, that journalists would continue to defy corrupt regimes, but also a recognition that the balance of power was against them.
Good journalism was, he said, one of the most important ways of protecting democracy. We should, and must, do all we could to support and sustain journalists and journalism as it moved into an uncertain future.