Backwashing Mulan: Liu Yifei as Chimerican (Huàllywood) hero?
Did you notice? Last week, race disputes whirled around two female Disney characters. On Monday US President Donald Trump used “Pocahontas” as a form of “racial slur” or “term of derision” to shame Democratic Senator Elizabeth Warren during a press event honouring ex-military Navaho code talkers. The president’s son Eric thereafter conflated the historical figure with the 1995 Disney film in a much lambasted tweet, decrying: “The irony of an ABC reporter (whose parent company Disney has profited nearly half a billion dollars on the movie ‘Pocahontas’) inferring that the name is ‘offensive’ is truly staggering to me.” While Trump the younger remained oblivious to context, it would be true to say that the Disney film had garnered its fair share of criticism over the years for its racial insensitivity and representations of Native American figures and themes. Perhaps in light of such, it might have struck some as refreshing to learn on Thursday that Disney had now hired the Chinese actor Liu Yifei to play the eponymous Mulan in a forthcoming live action remake of the earlier cartoon. However, while an online petition entitled “Tell Disney You Don’t Want A Whitewashed Mulan!” proclaimed success in securing Liu’s casting, there is a bigger picture surrounding this media event.
Recall here that Hollywood productions have been generating lots of negative backlash of late because it ‘still’ casts white performers in what are perceived to be Asian roles. Modern examples include, but are not limited to, Tilda Swinton as the ancient Tibetan guru in Dr Strange (2016), Scarlett Johansson in the 2016 live-action remake of the Japanese anime Kôkaku Kidôtai/Ghost in the Shell (1995), and Finn Jones in Iron Fist (2017). Earlier in the year a comparable backlash saw the “appropriate” ad hoc re-casting of Korean-American star Daniel Dae-Kim in the forthcoming Hellboy reboot, after Ed Skrein’s involvement as Major Ben Daimio was framed as another troubling Hollywood whitewash. From such a vantage the backwashing gesture of casting of Liu as Hua Mulan appears to herald a new dawn of Disney diversity. However, while it may well be read as a progressive move in a disproportionately white media world, there is a bigger picture that pyrrhically remediates this liberal victory.
The Kung Fu Panda series offers itself as an illustrative case in point. It is fair to say that the reception of these films within China were, unlike in “the West,” politically divisive. Yiman Wang, for example, argues that this franchise illuminates Hollywood’s strategic meshing of competing “media capitals” to help crack the lucrative Chinese film market. Here, by trading in “Chinese elements” that originate outwith the geopolitical site of China. On account of this, Wang notes that this hybrid cinema’s “return” to its so-called “originary” country found domestic audiences responding with feelings of “awe, wow and shame.” The latter perhaps best made most clear by the sentiments of Kong Qingdong, who warned a Chinese readership that: “Hollywood robs Chinese symbols and uses your own symbols to conquer you,” to “brainwash you and conquer your heart,” while taking Chinese money. If read in this light, the Mulan reboot surely also betrays the self-same neoliberal market ethos that teaches that to succeed globally, companies must concede locally. Of course, with Hollywood films being so attentive to market logic, the key is really to try and produce films that appeal to consumers within the two largest markets and economies in the world: America and China. This detail explains the English voice castings in the Kung Fu Panda films, and the fact that at its ideological core it is a quintessential Hollywood flick. 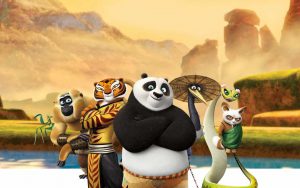 As if in counteroffensive to such gestures, within China a new era has seen the birth of what has been called the transborder Huallywood film industry: whose dream is to compete with Global Hollywood on its own terms. Zhen Zhang describes Huallywood as being associated with two phenomena: 1) China’s rise to become the world’s second largest film market, and, 2) the nation’s economic ascendance to global producer by means of transnational co-production ties with Hong Kong, Taiwan, South Korea, Japan, and the USA. A material manifestation of this resides in the National Digital Film Industrial Park in Wuxi, near Shanghai, which has been nicknamed Huallywood since 2012. As Sharat Shroff explains, the prefix Hua (华) here means ‘China’ (“hua ren” referring to Chinese people and “hua yu” to the Mandarin language). More recently, the Taipei Times reported on a different ‘Huallywood’ studio linked to the Canadian-based Cameron Thompson Group, which began constructing a film park in Huallien County in Taiwan, “with a view to making it a local version of Hollywood.” Although this Haullywood manifestation boasts a different etymology, linked to the studio’s location in Hualien (Hoê-liân), in both instances these Huallywoods emerges as a wannabe Hollywoods. In Chinese academia, the label Huallywood has thus also increasingly gained traction, being deployed to refer to transborder co-productions, predominantly made in-between China, Hong Kong, and Taiwan.
What becomes interesting here is that revenue sharing drives concomitantly witness Hollywood and Huallywood productions converge. Prima Facie 2016 films like The Great Wall and Rogue One: A Star Wars Story reveal themselves to be part Hollywood and part Huallywood. On a facile level these films offer us something of an inverted picture. For, on the Rogue One hand Disney cast the transnational Chinese duo Donnie Yen and Jian Wen as part of a bid to appeal to Chinese fans—who were famously indifferent to the Star Wars jewels in the Hollywood-franchise crown—while on the other, Matt Damon and Pedro Pascal were cast as complementary lǎowài (老外 “foreigner”) stars in Huallywood’s most expensive film to date. While the latter became embroiled in knee-jerk accusations of Huallywood-style “whitewashing,” and global perpetuations of the “white saviour” myth, taken together the two films allow us to apprehend the emergence of what we might call after Mike Featherstone, an alternative ‘third culture’ cinema. So, what might we call this outlandish cinema?
Here, I throw up two interleaving terms to help describe this phenomenon. The first is Huàllywood films. This being a strategically “shanghaied” term that employs an alternative homonymic Chinese sound huà (化) as its prefix: which gathers together a constellation of meanings that include to change, convert, influence, transform, while drawing in other character components linked with disguise, and varying. Notions that resonate with Mulan’s form and content, with the female protagonist wearing an armor disguise to pass herself off as someone she is not, and the Disney film casting a Chinese actors (who is technically a US citizen) in an English language film. Linked to this, the other term I proffer is that of Chimerican cinema. A label that forges felicitous links to the mythical chimera—a beast composed of bits and pieces of different creatures—and the millennial monster that the historian Niall Ferguson’s and economist Moritz Schularick christened “Chimerica”: A symbiotic colossus forged after China opened itself up to global capitalism, and joined together the (then) global big saver (China) with the global big spender (America), and the largest global exporter (China) with the world’s (then) number one over consumer (America). Of course, while Ferguson and Schularick argued that Chimerica was coming to the end of its life in 2009, anyone who studies movies know that the successful monsters tend to resurrect and make a comeback in a series of cinematic sequels. The Great Wall, Kung Fu Panda, and now Mulan make material this becoming-cinema of Chimerica, constituting films that appear to trade in Chineseness, but essentially expose an undergirding Hollywood mode or medium as their take-away “message.”
Disney’s 2019 Mulan will no doubt be an expensive third-culture spectacle, that casts Yifei  Lui into the role of global Huàllywood posterchild. She will certainly also embody a Disney hero that will significantly increase the tiny footfall to the popular “Shanghai Disney Resort,” which opened its Chimerican gates for business in the summer of 2016.
Might we not say that in the last analysis, then, while it is no doubt a great thing that Disney diversity is on the radar today, we would be foolish to neglect the fact that the driver behind progress is in this case profit. Economic might makes right, after all. 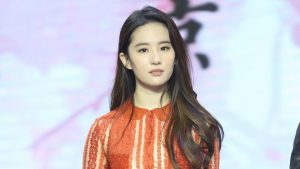