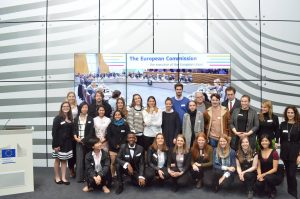 Postgraduate public relations and gender studies students spent two days visiting Brussels for a series of specialist public affairs seminars organised by Dr Alenka Jelen-Sanchez. The annual event aims to introduce students to public affairs, advocacy, public policy and communication practice in the EU, as well as to the European Commission and the European Parliament.

The students briefly visited Finance Watch NGO, where they were hosted by Katarzyna Hanula-Bobbitt, Senior Public Affairs Officer, who introduced them to her work at the Finance Watch.

Students really enjoyed the experience! MSc Strategic Communication and Public Relations (Joint Degree) student Jack Mallon from Scotland said: “It was extremely exciting to see how communications and public advocacy strategies work in such important institutions as the European Commission and European Parliament, while visiting such a beautiful ancient city as Brussels”.

Sophia Honisch from Germany added: “All in one, our fieldtrip to Brussels was a great experience. The guest speeches were very well organised, interesting and offered a perfect overview on lobbying. In general, the program was extensive but not overloaded. In terms of my studies, this excursion confirmed me in my wish to work in Public Affairs.”

The visit was also very interesting for students from outside the EU. Chelsea Pecson from Philippines told us: “Coming from Asia, I have always had the general notion that the European Union operated differently from ASEAN and other unions from other parts of the world. However, I was not aware of how exactly different they functioned and what best practices could other unions adopt from it. I personally liked the talks and learned briefly the ‘tricks of the trade’ on lobbying. All in all, it was a good immersion spending two days in Brussels.”

The trip to Brussels is a great opportunity for students in terms of enriching their knowledge of current issues and developments in the field of EU communication, public affairs, public policy and lobbying as well as in terms of networking and exploring their career opportunities in the EU.