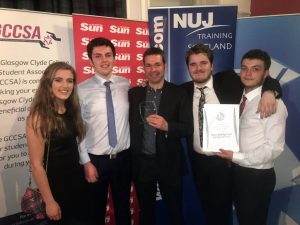 Communications, Media & Culture production students are on a roll with their current win at the Scottish Student Journalism Award taking them to 3 years in a row for Best Broadcast.  The quality and dedication shown by our students has been recognised and they winning students, Kate Galbraith, Sean Hayman, Calum McIntosh and Jamie Sutherland were presented with their award on Thursday night.  here is what they had to say about their documentary.

“Rab Bannan is the beating heart of the Barn Boxing Club in Coatbridge. Boxer turned coach, he is now a living legend with over 40 years experience in the sport. Each day he is turning young boxers into world-class champions one by one and we wanted to know the secret behind his success…

When creating The Cornerman, we knew it was essential for us to show boxing as a sport, but also to highlight that boxing is a way of life. Many of the Barn members use this sport as a way to escape their troubles; coming down to the gym not only keeps them fit but also gives them something to work for. Every member of the club could tell you at least ten stories about Rab, saying that they don’t know what they would do without him. The amount of lives he has transformed through boxing is unimaginable, and this was the biggest aspect of the story we wanted to capture on camera.

Over the many weeks we spent at the Barn, we found it incredibly touching how close Rab was to every single person at the club. Whether it was a 9-year-old boy, a 50-year-old man, or even a 5-year-old sister of one of the boxers, Rab could tell you something about every one of them. It was this dedication to his boxers that showed us that we needed to create a documentary that showed how dedicated they were to him.”

Also up for commendation was the doucmentary ‘Ups and Downs’ which focuses on a unique theatre group based in Motherwell, exclusively open to young people with Down Syndrome and their siblings.  This work was produced by Jemma Campbell, Andrea Linhova, Gemma Miller and Laura Beaton.  You can watch it here https://vimeo.com/162972094

Stefan Schmid was also  ‘commended’ in the Calum MacDonald Overall Excellence within Student Journalism Award for his work on the humanitarian crisis in Lesvos.

Well done to all of our students who were nominated in the SSJA’s!