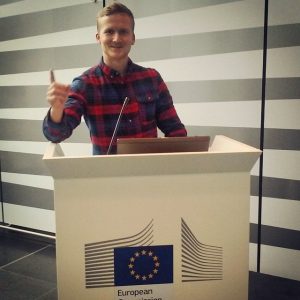 We are proud to announce that Sam Black Prize for Best Public Relations student in 2014/15 went to Dagur Skírnir Óðinsson, who has successfully completed and will graduate from MSc in Strategic Communication and Public Relations (Joint Degree with University Pompeu Fabra, Barcelona) on 27 November 2015. It was the first time that the prize was won by a student on the joint degree programme.

Dagur was delighted with the prize and said that studying on this programme was a great decision: “First of all, I enjoyed my time both in Stirling and in Barcelona. To be able to live and study in two different countries is a wonderful opportunity. Secondly, both the courses and the lecturers were excellent in both schools. One of the highlights of the programme was a trip to Brussels where we were given the chance to witness first-hand how the European Union works. Lastly and most importantly, I made good friends from all over the world.”

After finishing his dissertation, Dagur moved back to Iceland where he landed a job at the Red Cross as a project manager. At the Red Cross, he gets to work in the humanitarian field, in which he became interested in while studying Public Affairs and Advocacy in the second semester.

He does not have firm plans for the future, but says that it looks very promising and bright. He feels that his time on the programme has given him the tools and confidence to achieve great things in various fields, all over the world.