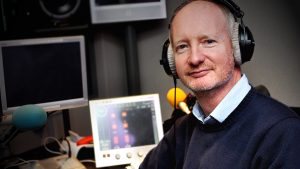 By way of introduction, I have recently been appointed Honorary Professor in the School of Arts and Humanities at Stirling University and I wanted to offer a brief outline of my background and experience. I am a senior producer at BBC Scotland, starting my career in television and making a relatively unusual move to radio. Most go the other way. The attraction of television is pretty obvious, perhaps less so the appeal of radio. There has been a constant questioning of its relevance in the 21st century – with streaming services online and on mobile devices, does anybody want to listen to radio now?

The answer is a resounding ‘yes’. The listening figures for BBC radio remain at a record high, whilst the television market has fractured with the arrival of multiple channels and viewing options. There’s still a huge demand for TV, but it’s no longer a medium that’s controlled by a few major suppliers.

In terms of speech radio, there is a great appetite for both drama and documentary, and the great attraction of creating this in audio is the simplicity of production. I am involved in making radio documentaries around the world, and I carry a small digital recorder in my pocket. Sometimes people can be very disappointed – ‘You’re from the BBC and all you’ve got is that?’ Well, the answer is yes. It’s all you need.

Used with care, the new digital recorders can achieve extraordinary results, and document events unfolding in the moment. I was recently in South Korea following the story of female divers, women in their 80s who still plunge into chilly waters to dive for seaweed and shellfish. We had no idea what would happen, and at the last minute a couple of them decided it was time to enter the water, as – to my surprise – did the BBC presenter. So they all jumped in. With a close mike the sounds are fantastic – a real sense of adventure in the choppy waters of the East China Sea. Yes, it could have been achieved with a small digital camera, too, but not so easily. Ironically, it is often the sound that is hard to capture if you are concentrating on getting the best images.

I hope to be able to talk to students about all aspects of the media, not just radio. We hear a lot about how everything is changing in the new digital environment, and every day it seems there is a fresh technical development for us to respond to. But the fact is that we are still storytellers, and what is changing is the way these stories are delivered and seen, read or heard. I hope I can encourage you to find not just the right stories, but also the right way to tell them.