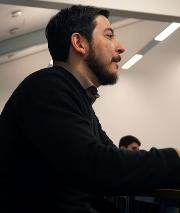 As most of my research and teaching these days centres on psychosocial aspects of digital media and creative industries, it’s not often that I get asked to participate in events that engage more traditional media forms. And, I have to say, that it is always a pleasure return to my first academic love: cinema.

I considered it, therefore, a real treat to be able to attend this year’s Liverpool Radical Film Festival, 22nd-25th October 2015. To watch and discuss films both old and new that have rarely seen the light of a projector; to debate the formal qualities of avant-garde films or the radical critique of ultra-realist reportage; and to deliberate with expert political associations of unconventional filmmaking practice – this is the kind of thing that set me on the road to a life of scholarship and intellectual development.

Other Radical Film Festivals and organisations (the Bristol Radical Film Festivals; the Radical Film Network and so on) have emerged in recent years, and represent a critical mass of interest in radical filmmaking in the UK and beyond. Our Division has, of course, a long-standing relationship with cinema, and given the current research at SMRI on film (e.g. the Silent Cinema and the Transition to Sound colloquium in May 2016), it seems timely to be able to write about such events.

There were a couple of real LRFF highlights for me. The session on contemporary Croatian Cinema programmed by the Subversive Cinema Festival opened my eyes to a rich national cinema I had never really had the opportunity to engage before. The session, a double-bill consisting of social realist drama short On Shaky Ground (Tarokić, Cr., 2014), and the documentary feature, Married to the Swiss Franc (Oremović, Cr. 2012), worked in tandem to highlight the woefully under-reported housing financial crisis in Croatia, and the hardships felt by the Croatian people during the past 15 years or so.

Something of a personal favourite: a screening of archive footage of the Chinese Labour Corps, from the Imperial War Museum, accompanied by live performance from the Pagoda Chinese Youth Orchestra, and recital by members of the orchestra in their own words, told the little-known story of the 140,000 or so workers who were transported to Europe during the First World War as labour to excavate the vast trench system used by the Allied forces in France and Flanders. This screening was given added poignancy, as the Pagoda Arts Centre, a key cultural hub for Europe’s oldest Chinese community has recently had its funding removed.

Another bonus featured a screening of Hell Unltd, a prescient collaboration between Helan Biggar and Norman McLaren, made in 1936 which charted the human costs (and, crucially, the cost to functioning democracies) of accelerating armament. The film was introduced by Anthony Killick, doctoral student at Edge Hill University, and one of the organisers of the Festival. The film was accompanied by Killick’s own deep house soundtrack, which made for an extraordinary juxtaposition of 20th and 21st Century sensibilities.

Indeed, on a side note, but no less interesting, is Killick’s involvement in another local project – the Liverpool Small Cinema, situated in the old Magistrates Court on Victoria Street. Its construction earlier this year was documented by Sight and Sound in a short video diary and article filmed and penned by Killick himself. The Cinema has gained substantial regional interest with its ongoing screening programme and events list, and I would argue, provides a really meaningful model for civic innovation and community-driven moving image projects on a no-budget.