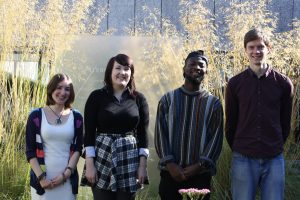 The Jonathan Witchell Memorial Prize for Best Radio Feature 2015 has been awarded to Louise MacGregor, Jide Olanipekun, Elizabeth Ross and Martin Rowbottom. Their winning piece, “The Art of Storytelling” was produced last semester as part of their third year module in Radio Feature Production.
Their six minute feature focused on the tradition of storytelling in Scottish culture, taking in the legend of Rob Roy MacGregor as a starting point within their narrative.
The prize is awarded in memory of Jonathan Witchell who was a Media Management Masters student at Stirling in 1997, and is donated each year by his family and friends. Jonathan died in 2007 of a rare form of cancer.
Tom, Chloe and Giles Witchell sent their congratulations to the group, and commented on the lovely sound effects, excellent pace and good use of music within the feature.  They were also impressed by the narration, saying it “really pulled the listener in”, making them feel they were on the journey with the reporter.
Student Elizabeth Ross described how much she enjoyed the production process: “Until the opportunity to make a feature arose I did not know what I wanted to do when I left university – now I know it is exactly that. This module allowed me to realize what my strengths and passions were.”
The prizes were presented by tutor Suzy Angus on 24th September and you can listen to the full feature here

For more on Jonathan Witchell and the memorial prize click on http://www.cmcstir.org/theaudioseen/?page_id=35