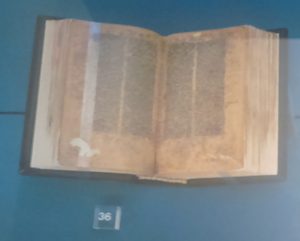 Marco Polo’s Travel Bible at ‘The Shape of the Book: From the Scroll to the Codex’, an exhibition at Biblioteca Medicea Laurenziana, FlorencThe publishing studies community (including a healthy Stirling cohort) descended on the picturesque Villa Finaly on the outskirts of Florence in June for the second instalment of the By the Book conference.

This year’s theme, ‘Books and reading in an age of media overload’, naturally led to much angst over the future of the book in age where smartphones, tablets and a range of other devices can provide users with instant gratification compared to the slow burn of reading a good book.

While many have mourned for the death of the book as a result of this shift in media consumption, conference co-organiser Miha Kovač was careful to remind the audience that critics have been declaring the death of the book since Johannes Gutenberg’s invention of the printing press in the 1430s.

But if this worry is nothing new, does the current shift towards digital media consumption present a greater challenge than previous threats such as the phonograph and broadcast media?

Conference delegates used a range of methodologies and geographical perspectives to attempt to answer this question.  Melanie Ramdarshan Bold’s research into social authorship and One Direction fan fiction on Wattpad and Alexis Weedon’s comparison of cross media storytelling in the early years of broadcast media and the contemporary media landscape were particular standouts.

The conference also covered themes outside of the digital revolution. Alessandro Gandolfo, Mate Juric and

Srećko Jelušić’s fascinating research discovered that students are unlikely to follow up reading recommendations of their professors, while Franjo Pehar and Josipina Selthofer’s analysis of publishing studies reading lists showed that the University of Stirling’s Publishing Studies MLitt was one of the most demanding courses. Hopefully there’s no correlation between those two findings!

After two days of fruitful discussions about the future of the book in the digital age, I was happy to find an exhibition celebrating the history of the book in the historic Biblioteca Medicea Laurenziana showcasing treasures such as a manuscript of Dante’s Divine Comedy and Marco Polo’s Travel Bible.

The exhibition, ‘The Shape of the Book: From the Scroll to the Codex’ had originally run in 2008, but had proved so successful that the library had decided to run it for a second time in 2015. Visitors were struck by the aura of these historical objects as something worth preserving, perhaps suggesting that the future of the book is not all doom and gloom.