There’s a fabulous story about George Brown, the former British Foreign Secretary in Harold Wilson’s first government. It’s almost certainly not true, but it should be.

Brown was a drunk in an era when it was quite acceptable to be a senior member of Her Majesty’s Government while being incapable of functioning as a rational human being. (Ok not much has changed.)

The story goes that Brown was on a trip to South America extolling the virtues of Britain in a post-colonial world. One night, he’d rather over indulged at a very grand reception. From across the room he spotted a talk willowy figure dressed from head to toe in scarlet. He decided he might be in with a chance and sauntered across to the alluring ‘lady in red’.

“Fancy a dance, dear,” he said in the seductive tones of a politically-correct Nobel Prize-winning scientist.

The tall slim figure looked down at Brown disdainfully.

“I’m sorry sir, there are three reasons why I can’t – you are blind drunk, this is not a waltz but the Peruvian national anthem, and I am the Cardinal Archbishop of Lima.”

For quite a while, the Press turned a blind eye to Brown’s indiscretions. Sobriety was not much valued in the newspaper business in those days, and he was a character. But Private Eye was less inclined to ignore Brown’s activities. The phrase “tired and emotional” was coined as a euphemism to describe his state of consciousness in the service of the realm. 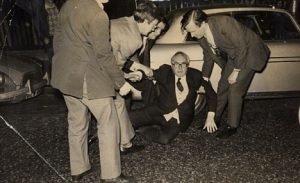 From my teenage years I vaguely remember a story of Brown – then a peer – being found by reporters one evening in the gutter. The incident, which happened in 1976, when Harold Wilson was still in Number 10, prompted an observation in The Times that “Lord George-Brown drunk is a better man than the Prime Minister sober.”

I had sort of forgotten about Brown until he popped up in my life again last week when I was going through the papers of the late Alastair Hetherington in the special collections at the London School of Economics.

Hetherington, a former editor of the Guardian, ended his career as a professor of journalism at Stirling. Most of his papers are in the University of Stirling library, but LSE has six boxes of material.

LSE’s holdings are almost exclusively file notes of meetings with politicians – mostly Hugh Gaitskell and Harold Wilson (both of whom recognised the importance of the Guardian as the UK’s only left-leaning national newspaper); Jo Grimond the Liberal leader; and Dick Crossman (the Labour politician and professional political gossip).

There are a few records of meetings with Brown, including one at the Shepherd’s Hotel in Cairo where Hetherington walked in on a full-scale row between Brown and his Foreign Office minder; and another of a meeting to discuss the Middle East where Hetherington described Brown as “neither drunk nor sober”. Hands up if you know what he means by that.

In December 1964, two months after the General Election that first brought Wilson to Number 10, Hetherington had dinner with Brown where they gossiped about members of the cabinet, and discussed the economic situation, the state of the pound, and Vietnam – Wilson was decidedly uncomfortable about the Johnson administration’s policy there.

Brown – who was an impressive political operator at his best – impressed Hetherington. But the editor noted: “I was thankful nevertheless that he wasn’t prime minister.” He was not the only one who thought that. Tony Crosland, referring to the contest between Wilson and Brown for the Labour leadership had said it was a choice between a “crook” and a “drunk”.

I thought of the gutter story again on my last night in London when I lost my footing in a pothole near Covent Garden and fell dramatically at the feet of a tourist – finding myself in much the same position as Lord George-Brown in 1976 (though I was sober your honour).

As I lay there on the tarmac, two things came the mind. The first was whether my sprained ankle would be considered to be a work-related injury given I was a on a research trip; the second was Oscar Wilde’s observation: “We are all in the gutter, but some of us are looking at the stars.”

I bet George Brown thought that too.