Fans of British comedy of the 1980s will be familiar with the involuntary and politically incorrect image that rushes into Reggie Perrin’s mind every time his mother-in-law is mentioned. His wife doesn’t see what he sees, but his face betrays the fact that something is amiss.

Although I couldn’t see inside their heads, I noticed a few Perrin-like facial spasms when I told colleagues I was off to London to spend a couple of days in the LSE reading rooms researching the papers of Alastair Hetherington. The word jolly sprang to mind.

I knew the head of division had his concerns as he probed me about what I would be up to when I was away. Had I been a mind reader I might have heard him thinking: “Yes, he’ll be having a leisurely breakfast on the terrace of his room with a view; lunch in the Savoy Grill washed down by a delicate bottle of Fleurie; an evening at the opera followed by jazz in one of the seedier joints of Soho, sipping over-priced champagne. I’d better check his expenses.”

But my card had already been marked.

The note telling me I was to get funding for the trip was to the point: “Tom: Awarded, but please provide a detailed breakdown of accommodation and travel costs. Subsistence can only be claimed within agreed amounts”. 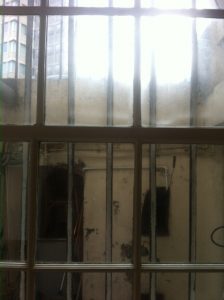 A room with a view? Be careful what you wish for…..

Regardless, I booked an apartment beside Hyde Park – specifying “a room with a view”. As you can see from the picture, I was not disappointed when I opened the blind. Who says academic life doesn’t have its luxuries?