Masters students from the Stirling Public Relations and Strategic Communications programmes participated in two bespoke fieldtrips in the Autumn semester 2015. The first leg involved a two-day fieldtrip in Brussels, meeting communications staff working within the institutions, and public affairs professionals trying to influence EU policy making. The group received expert briefings from European Commission and Parliamentary staff, and were also treated to a ‘Brussels Uncovered’ session where researchers and advisors working in the two major political groupings within the Parliament shared their insights on how the institutions really operate, good practice in public affairs campaigning and how to factor the particularities of European Parliamentary politics into communications strategy. 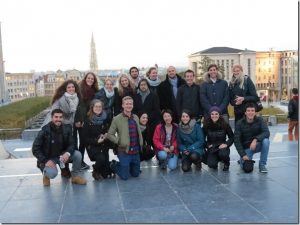 Outside the Brussels political quartier

Students were also able to quiz a Commission spokesman on how ‘Team Juncker’ was settling in to their new roles and the key changes in portfolios and priorities for the new Commission. There was also a special session on the new Transparency Register and how this fitted in with the recent political commitments to transparency and opening up the EU institutions.

The Brussels programme included a session on public affairs after the financial crash, which proved something of an eye opener for many of the group as the panelists explained how the politics of banking re-regulation has been playing out in Brussels over the last few years – the insights from industry and reform community perspectives provided much food-for-thought and a lively question & answer session.

Our superb hosts in Scotland House also gave a very interesting presentation on the role of regional and national representation offices in Brussels, and a very candid insight into the uncertainties that the Scottish independence referendum had created across the Brussels Bubble.

Once the formal panels were finished the group were taken on an interactive Brussels Lobby Tour run by NGO Corporate Europe Observatory that gave students an alternative perspective on lobbying and influence in EU politics.

The Stirling students were on the road again for a visit to the Scottish Parliament and panels and briefings on the public affairs industry in Edinburgh. The trip involved a mixture of presentations, panels and bespoke guided tours of the Holyrood Parliament – which included briefings from the Parliamentary research and media offices, as well as input from members of the press corps covering Holyrood, and lobbyists and campaigners working on a variety of issues including renewable energy, sectarianism, gambling and grass-roots mobilization in post-referendum Scotland. 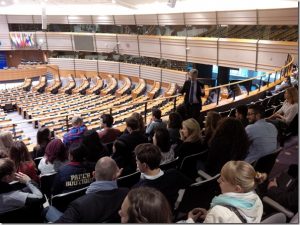 Needless to say there was much to take in – for Scottish and international students alike. The consensus during the post-trip debriefing (held in a local Edinburgh hostelry) was that both fieldtrips gave students new perspectives on strategic communications and the need for a sophisticated understanding of political and parliamentary processes. The fieldtrips have also sparked a number of creative research proposals and dissertation ideas …watch this space!