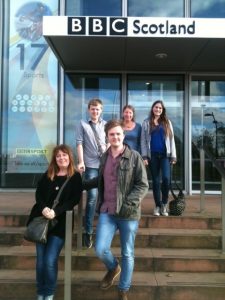 A group of 4th year Film and Media production students were treated to a tour of the radio drama studios at BBC Scotland in Glasgow last week.  Accompanied by radio tutors Suzy Angus and Janieann McCracken, the students were welcomed by Development Producer of Drama, David Neville.  After a visit to the edit suite, David took everyone into the main performance and recording area, pointing out the difference in the “live” acoustics derived from the various wall panels and screens, before moving on to the “dead” zone.  This latter smaller area is better used for recording exteriors in radio dramas, where appropriate “ambient” location effects are fed into the production by a sound engineer and mixed with the actors’ performance.  Next was a quick walk through a door with several types of door knockers and locks into what seemed like a normal kitchen, complete with washing machine, kettle, crockery and sink.  Although this room is obviously used to portray the 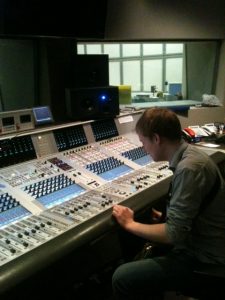 everyday effects of a kitchen, the low ceiling also helps the space sound like a cell and other small areas.  Then everyone was given the opportunity of making their own footsteps effects by going up a staircase that had three surfaces – concrete, wooden or carpet.  The final part of the tour ended in the control room, where David explained the process and various roles of those involved in producing a drama, right from draft script to final edit.  A couple of the group were allowed to get up close to the vast array of mixing desks, but there was no opportunity to press any of the buttons! 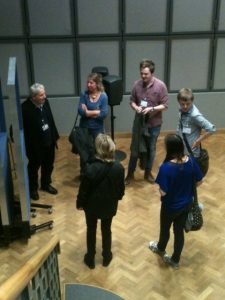 Although the visit was primarily to see the radio drama staff and studios, there was also an opportunity to meet another radio producer – and alumnus and previous station manager of Air3 – Matt Ludlow.  Matt is a senior producer with Radio 4 Extra, and after a quick cup of tea and a chat about his work and tips in getting into radio, he took the group round a number of radio studios that are used for different types of programme output.  There was an “oooh” moment as he demonstrated a whole desk (with mics etc) being raised up and down, explaining that some presenters prefer to do their show stand 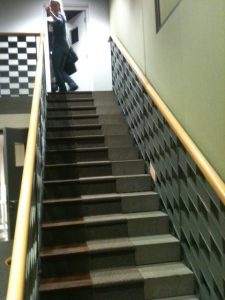 Final year student Ania Przybysz-Hunt found meeting the staff especially valuable. “I really enjoyed our visit to BBC Scotland. It helped me change my vision about the realities of working in media production. It especially gave me the opportunity to view how different people co-operate with each other and how all the roles come together to create a complete production”.

For more on radio at CMC go to http://www.cmcstir.org/theaudioseen/