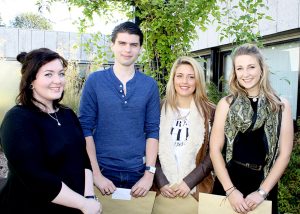 The Jonathan Witchell Memorial Prize for Best Radio Feature 2014 has been awarded to Carolyn Kennedy, David Mercer, Dionne Cassidy, Eilidh Campbell and Alex Trimble. Their winning piece, “An American in Britain” was produced last semester as part of their third year module in Radio Feature Production.  The programme profiles the volunteers who work on the Bo’ness & Kinneil Railway. The prize is awarded in memory of Jonathan Witchell who was a Media Management Masters student at Stirling in 1997, and is donated each year by his family and friends.

Tom, Chloe and Giles Witchell sent their congratulations to the group, describing the feature as very descriptive with lovely sound effects, and also said how much Jonathan would have enjoyed the feature. Student David Mercer summed up his delight : “I think of behalf of the group we are all surprised at how well our piece has done. We are so proud of “An American in Britain” and what it has achieved. We would like to say thank you to the Witchell family and friends for listening to our radio feature and choosing it to win this amazing prize. I am extremely happy that they felt the feature on steam trains is something that Jonathan would have enjoyed listening to – when I heard that comment I felt that the piece had become something more than just an assignment. Also we would all like to thank Suzy Angus for being an awesome tutor. She supported us all the way and really believed in the piece from the beginning, which made us determined to make it a great radio feature. All that is left for me to say is a big thank you to Carolyn Kennedy, Eilidh Campbell, Dionne Cassidy and of course our American group member, Alex Trimble, for being a fantastic group to work with on this feature. I had the most amazing time making “An American in Britain”.”

Alex, the American exchange student in the group, is currently in Wyoming and planning to return to Stirling next year in order to complete her degree.

The prizes were presented by tutor Suzy Angus on 24th September.

For more on Jonathan Witchell, and to hear the winning feature go to http://www.cmcstir.org/theaudioseen/