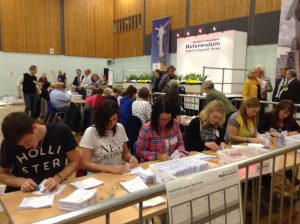 Sometimes opportunities will arise in your journalist career that you are just going to have to jump at: the chance to meet a distinguished politician, celebrity, or sports star; the chance to report on an election in a foreign country; the chance to work with a well-known company to cover an event.
These chances may be rare, and so you cannot afford to simply pass them up.
When Eddy Borges-Rey contacted me about covering the referendum, I was totally stunned. I had been blogging about the #indyref for quite some time, and to actually be given the chance to officially report on it, on the night, was quite something.
Furthermore, it was not just the chance to report for my own work, but to report for the BBC. Just weeks earlier I had stood before the security barriers in the BBC Scotland HQ in Glasgow and said “one day”.
Now I was standing waiting for a BBC Scotland employee, ready to hand in my passport for my Eligibility to Work form. It was quite something. 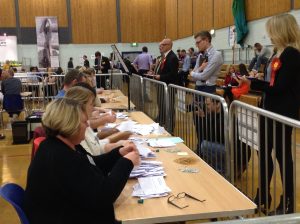 My role was to be a Stringer for BBC Scotland at the Falkirk count on the night of the referendum.
The night itself was an experience I will never forget.
You can sit in as many lectures, seminars and workshops as you like (and of course you should), but nothing compares to what you learn on the job. I learned so much about journalism that night than I ever thought I would.
Just using your nose for news; handshakes, thumbs-ups, back-slapping, disappointed faces, all a signal that something is happening in the air that you need to get on the case of.
“You look happy?” you say to a Better Together agent. “Well, things look positive, I will say that!” he calls back. Excellent! We have some material, and something to develop further.
As a Stringer it was my job to message the Beeb throughout the night, providing them with a constant feed of information, just like the example above. “Better Together officials appear confident at the Falkirk count, while Yes supporters claim ‘it isn’t over till the fat lady sings’”, or “Falkirk turnout expected in the next ten minutes”. All of these messages were used for the BBC’s coverage, on television, and online.
You also get to know who to watch. MPs, councillors, Counting Officers: all excellent sources for reactions, expectations, and results. 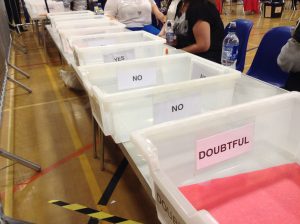 You also need to watch your counterparts. I made some excellent contacts at the count; people from Radio Clyde, Central FM, the Daily Record. Some of them you share information freely with. For instance, I asked what the postal vote return was (95.8%), sent it to the BBC, and shared it with those I felt comfortable sharing it with, because you are all there for the same reason, after all.
However, some you can also see as competition. The chap from the Daily Record, for instance, seemed extremely on the ball, and I shadowed him throughout the night, copying some of his tactics, and gathering any information he threw up.
When the results were about to be announced, I called the HQ in Glasgow, and was kept on the line before the results were officially announced.
I then confirmed the numbers at around 4am, and was told my job was done.
This was an almost surreal experience for me. Having the chance to work with such a distinguished organisation, at such a landmark event was beyond my wildest dreams. I learned so much about “doing” journalism; more than you can by just reading books.
Furthermore, it has expanded my future opportunities. I have been asked to cover the UK General Election next May, and have also had my CV passed on the BBC’s Talent Pool Coordinator.
As I said, there will be opportunities that could be once-in-a-lifetime chances, and you have to jump right in there with a notepad and pen.