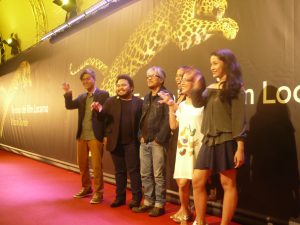 In a recent interview with me, Filipino director Lav Diaz, known for his six-, eight- or even eleven hour films, said: “The people who come [to see my films] are the followers and the curious … The curious will be converted or they will hate you more, depending on how they will see the work.” I belonged to the group of the curious when I went to Newcastle in 2012 to see a film, whose length I thought was a joke. I did not expect to stay awake for eight hours. Nor did I believe that it was possible for a film to be interesting and pleasurable for such a long time. Two years (and two meetings with Diaz) later, I found myself at the Locarno Film Festival as part of the Philippine delegation. Diaz presented his new – with only five and a half hours admittedly short – film From What Is Before, which was the first ever Filipino film that was nominated for, and that subsequently won the Golden Leopard, the main award of the festival.

Having followed Diaz’s work since 2012, and having shifted my research from Slow Cinema to the aesthetics of trauma in his (slow) films, I was asked to join cast and crew for a few days in Switzerland, accompanying them from red carpet photo sessions to lunch parties to public Q&As. The invitation did not come exclusively because of my research. Diaz and I support, respect and appreciate each other’s works, and have done so for a while. The invitation was an attempt at coming together again, celebrate the presence of his new film at a major European film festival, enjoy each other’s company, and for me, get some work done. I had planned an interview with Diaz for months, but it had proved difficult to schedule this across seven time zones, especially when he shoots his films in areas far away from civilisation, which is the case with almost all of his films.

Locarno Film Festival was a great experience, and came at the right time in my PhD work. I had finished drafts of my three body chapters and needed a spark to solidify them. It was more than a simple spark, though. I met a few followers of my work, who knew my website and wanted to have a chat about everything slow. I also made new contacts; most important to me is perhaps the one to Christoph Huber, who works at the Austrian Film Museum, which, slowly but surely, is in the process of setting up a Lav Diaz archive. And then there were the many Filipinos and Filipinas, who welcomed me into their circle as if I had always been part of their big family.

After two years of hard work, bogged down in books and research material, I was presented with a lot of open doors, which I had never thought of. Diaz talked about book publication, teaching in residence in Manila, a retrospective of his films in the Philippines – future opportunities for me, which he suggested and which he would wholeheartedly support.

A PhD is not only about getting a degree. To me, it is important to do something with the material I produce. It is less a matter of where and how I publish it. The main aspect to me is making it available to the wider public in whatever form. I feel as though my work actually makes a difference, even if on a small level. My research and my output – mainly through my website – helps to raise awareness of a filmmaker, who has become a growing force at European festivals, but who describes it as a burden to be almost unknown in his own country.

Nadin Mai’s blog, The Art(s) of Slow Cinema can be found at http://theartsofslowcinema.com