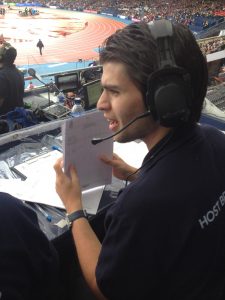 Students from the University of Stirling are playing a key role in bringing the Commonwealth Games to homes around the world.

Fifteen people – all on BA Honours courses in the School of Arts and Humanities – are working for TV crews bringing images of the games to an international audience, as part of the Glasgow 2014 Host Broadcaster Training Initiative.

The students are all film and media and/or journalism students at Stirling and are working for the host broadcasters Sunset+Vine and Global Television (SVGTV). They are providing footage to global broadcasters like the BBC.

Some students are acting as assistants or “runners”. Others are working as “loggers” – helping to sort the huge amount of footage coming in across games sites – and one is even helping with the medal ceremonies. Two have also managed to win places as runners and drivers for the Australian broadcaster Network 10.

Dario Sinforiani, head of production teaching at the University, said: “The Games are giving our students a great opportunity to work with top TV professionals and get amazing work experience. This is an unprecedented opportunity and will stand them in good stead when they enter the job market.”

He added: “In total around 200 students are working on TV production roles at the Games, under the Host Broadcaster Training Initiative run by SVGTV in conjunction with Creative Loop, an organisation that acts as a bridge between education and the media industries.”

The Stirling students are:

Jonny Shepherd, a BA Film and Media student from Edinburgh, said working at the Commonwealth Games was “fantastic”.

“The guys I worked with really got me involved and really appreciated the help I gave them, as well as my willingness to stay behind after the games to help them de-rig everything, despite losing some sleep to get up at 5 a.m. the next morning for work!”

He added: “I have thoroughly enjoyed it and feel I have gained a huge amount of experience and it will definitely boost my CV in applying for jobs.”

David Mercer, a BA Film and Media student from Ayrshire, said: “I have been having a fantastic time working for the Host Broadcasters. I worked at the International Broadcast Centre on the 7 July and since I did a good job they asked me to come back. Turns out I ended up working there until the 16 July, then I started my runner role at Celtic Park for the Opening Ceremony. That was fantastic. It was amazing seeing all the behind the scenes stuff. While I was there I got to sit in the OB truck with the director, producer and script assistants. They explained to me how the broadcast worked from that room and I found it extremely interesting, especially when I see it in practice.

“I was offered the chance to work as a Broadcast Information Officer Assistant at the athletics at Hampden Park after the opening ceremony, which has been great, and I have now landed the closing ceremony as well. The whole experience has been fantastic and I could not have asked for a better place to start in the television industry. I have found it really useful and interesting, and met some of the nicest people who have told me to keep in touch.”