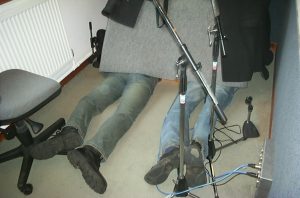 This might seem an odd way to begin, but I love films. I really do.  As anybody who knows me well can testify, the huge DVD collection in my house is bordering on the obsessive.  And let’s not even start with the box sets of Star Trek and Dr Who…   So why on earth am I teaching radio?

Radio is in my blood. From the days when I was tucked up on the sofa, my little three year old legs stretched out straight in front of me, waiting for “Listen With Mother” to begin, to “Music and Movement” at primary school and then later as a teenager tuning into Radio Luxembourg, the radio was always on.  Mealtimes were accompanied by a variety of programmes – news, current affairs, quizzes, drama, comedy (it was only years later I realized why my parents were weeping with laughter at “Round the Horne”), and of course “The Archers”.  Radio was just a way of life, and of “seeing” things in a very special way.

Fast forward to 1988, and as a 3rd year Film & Media student I’ve registered for the radio journalism module, 76AE.  Co-ordinated by John Izod, and co-taught by Richard Kilborn, Dan McLeod and Luke Hockley, we were assessed on a variety of tasks.  There were individual grades for scripting and voicing copy, and also interviewing (carried out in front of a tutor), followed up by two “live” news programmes produced by a group of 6, and topped off at the end of semester by a 5,000 word content analysis essay.  I loved it.  Yes, there were all-nighters, and fallings-out, but the adrenalin rush of editing, post–production and final broadcast was something almost tangible, and I wanted more of it.

After my degree I was lucky to work in the industry for around three years, mainly producing and presenting features on local radio, but also working with BBC E-Force in Glasgow, as well as doing some voice-over work and freelance media training. In the autumn of 1992 I was invited by a young and enthusiastic Head of Production called Tim Thornicroft  to help teach the very course I’d taken some years before.  20 years later and somehow I’m still here!  The module has changed significantly since then of course, plus there are more production modules to choose from.  The introduction to audio and video course was introduced in 1994 – complete with a multiple choice class test at the end of semester – and in 1996 Radio Drama entered the stage.  This was the first and last time the plays were recorded on quarter inch tape, as we moved over to digital the following year.  For those who don’t know or can’t remember, tape was recorded at either seven and a half or fifteen inches per second (we always used 7.5 ips), so for a fifteen minute play that’s a fair amount of tape.  I have an abiding memory of one student emerging from D7 completely covered in the stuff, rolls of it hanging off her neck and arms, looking like something from a horror movie.  She was searching for her chinagraph edit mark and wanted some help…  I can’t remember if we filled out health and safety forms then, and if we didn’t then we probably should have done as the editing process could be quite painful.  Wielding sharp razor blades for splicing tape, and re-winding large metal reels of it often resulted in nasty cuts if you weren’t careful, although to my mind the desperate sawing technique with a blunt razor was the most hazardous.   Occasionally a metal reel would fly off the edit machine if it wasn’t attached properly, spinning through the air before hitting the wall, but as far as I know all students finished the modules with the same number of fingers they had when they’d started.

Within a few years we’d said goodbye to the Revox and Tascam reel to reel recording and editing machines, and welcomed in Pro Tools. The old mixing desk stayed for a while longer along with the Quadraverb machine, much to the joy of both myself and technician Michael McDonald.  A lot of time was spent experimenting with the various delays, reverbs and flanges although our favourite was always Deep Space Echo.  Jaz cartridges, DAT tapes, floppy disks, mini discs all came and went within a few years before the eventual move to the solid state Marantz portable recorders, and the introduction of the Digidesign 003 desk.  Not only was there new equipment but there were new faces too.  Radio producer Adam Fowler joined in the late 90s to share the teaching of factual radio with me, followed soon after by Leslie Mitchell who taught audio on the introductory module as well as helping Tim on the TV Feature module, and who also co-ordinated the Documentary module.  Yes indeed, there were four of us  – two full timers and two part timers – teaching across the six production modules.

The equipment and people may have changed since the late 1980s, but the aim has always been to introduce to students the power and impact of radio, and to challenge them in their storytelling. Whether it’s holding out for that special first interview with the people who cloned Dolly the sheep, or transporting the audience into the far reaches of space or the horror of WWI trenches, there’s always an added bit of magic in creating images in peoples’ minds.  Poet and producer Sean Street calls it “the colour of sound”, and we try to help students see and produce that colour during their time here.

D corridor looks much the same as it did years ago, and it sounds pretty similar as well. Hundreds of students have passed through the edit rooms, many of them on their way to becoming radio producers and journalists themselves.  Although the thumping “clunk” of a battered Revox has gone, the sounds of slammed doors, laughter, the rustling of prohibited food and drink, raised voices, bursts of loud music and sound effects can all be heard bouncing out the edit suites and echoing into Crush Hall.