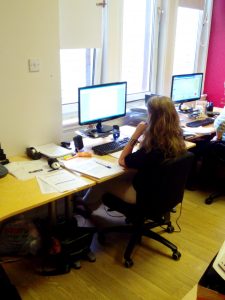 As part of an exciting new partnership between CMC’s Production team and leading Scottish independent production company Tern TV, eight graduating students competed for summer placement opportunities with the company. Three have been successful. First up was Film and Media graduate Monta Burge, who sums up her experience here:

“After having spent a week at Tern TV, working on a production management team, I can happily and honestly say that this has been one of the best, busiest and –  to my surprise – longest weeks I’ve ever had, though it didn’t even feel that way until it was over and I stopped to look back (true story. Had I not been so busy, there would have been more photos to show!). I worked on a real TV show that’s in post-production just now, and among other tasks helped with sorting out the necessary paperwork, chased up few of the contributors, wrote episode billings (having watched the whole show) and was invited to assist in a proof-viewing.  It was a brilliant week, I’ve learned how little I know and how much I still need to pick up, but most importantly – I’ve finally managed to lose my doubts if the career I’ve chosen is the right one for me.

It’s an insanely competitive environment out there, so many thanks to University of Stirling for setting up this amazing opportunity, and a great big thank you to Dario for all his efforts, persistence and the occasional much needed nudge. This is a chance to get relatively easily noticed, all you have to do is take the opportunity, show the best you’ve got, and (cliché as it may sound, but true as it is) this might just be your foot in the door. Here’s hoping this is mine!”