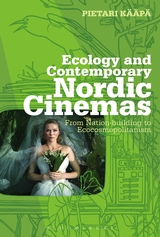 As part of my ongoing research interest in combining transnational cultural studies with ecocriticism, I recently published a new book, Ecology and Contemporary Nordic Cinemas with Bloomsbury Press. The book challenges the traditional socio-political rhetoric of national cinema by providing an ecocritical examination of Nordic cinema. In it, I use a range of analytical approaches to interrogate how the national paradigm can be rethought through ecosystemic concerns. The book also continues my fascination with Nordic cultural studies as I focus on a range of Nordic films, which I consider as national and transnational, regional and local texts, all with significant global implications. By synergizing transnational theories with ecological approaches, the study emphasizes the planetary implications of nation-based cultural production.

Ecology and Contemporary Nordic Cinema interrogates not only the role of nature in cinema, but also contemporary human habitations, global politics, ideological norms, and ecosystemic relations. While these are all of course vital aspects of Nordic cinemas, especially as nature and environmentalism feature centrally in Nordic self-conceptualisations, the scope of the book is, by necessity, concerned with the role of the human as part of a planetary ecosystem. This is the first study of its kind to cover the whole of the Nordic region and its multiple ecological intersections.

Chapter 2. The role of nature in the deer western and the road movie

Chapter 3. The horror film in an ecological context

Chapter 6. Green economics and the brownfields of the welfare state: crime thrillers and human ecology

Chapter 10. Ecodocumentaries and the sense of global responsibility

Chapter 11. Representing the end times: Ecological melancholia and the end of the world

“The quality and depth of the references in this book provide a new platform and focus for ecocinema scholarship. [with] fascinating chapters including studies of deer western and road movies; the horror film; children’s film; crime and urban eco-narratives, alongside specific Nordic multicultural and minority concerns, drawing from a broad corpus of films and documentaries. This multi-faceted and convincing study will inspire scholars and help to draw further comparisons with Hollywood and other national cinemas well into the future.” – Pat Brereton, Head of the School of Communications, Dublin City University, Ireland,

“Ecology and Contemporary Nordic Cinemas shows how film has helped create Nordic love for nature, but also how film works to conceal a Nordic history of the exploitation of nature. The study explores ecocritical approaches to genre, ideologies of the welfare state, globalization, transnationalism, and green activism in the cinema. All this is developed in a theory of transvergent ecocriticism, which helps the reader see newly emergent forms of environmental consciousness. Ecology and Contemporary Nordic Cinemas will be required reading for anyone interested in Nordic cinema or ecocriticism and film.” – Andrew Nestingen, Professor of Scandinavian Studies, University of Washington, USA