Back and front view of medal from 1970 Commonwealth Games

To honour and celebrate the sporting achievements and physical strength of athletes, the Ancient Greeks used to place a wreath of olive branches on the heads of the winners. For the first time, during the Athens Olympics in 1896, the winning athletes received medals. For the past 114 years the medals awarded at sporting events have had similar shape and design – a solid circular piece of metal with engravings on either side displaying royal, cultural and institutional symbols – based on honour and tradition.

Recently, the designers of the medals have adopted more artistic methods in making them. 2014 has been the year of change for the design of different sporting events’ medals. For the 2014 Sochi Olympics, ten special medals containing pieces from the Chelyabinsk meteorite were made. Moving away from tradition, more than half of the inner-surface of the Glasgow 2014 medals is empty space and some of the engravings are 3D printed.

For Glasgow 2014 the medals will not display any royal or imperial symbols, such as the British Crown, but during the two previous Games held in Scotland, the medals were standard and in keeping with the British and Commonwealth traditions which continued until Delhi 2010 when designers removed all royal insignia from the medals. The Commonwealth Games archive at the University of Stirling holds designs for the Commemorative Medals of the 1970 and 1986 games in Edinburgh which were given to each athlete who attended the Games.

For its 84 years of existence, the Commonwealth Games Federation has awarded 8582 gold, silver and bronze medals to a total of 55 countries. Although created 16 years apart, the 1970 and 1986 medals had very similar design on their obverse side showing the British Crown, symbolising that competing nations were ‘Crown Dependencies’, and the same pentagonal 20-knot chain loop which symbolises the coming together of the Commonwealth. 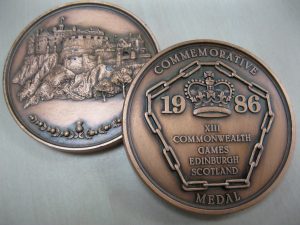 Back and front view of medal from 1986 Commonwealth Games

The medals for the XX Commonwealth Games are quite different from the standard Commonwealth medals. Jonathan Boyd, an award winning silversmith and lecturer in Glasgow School of Art, along with a small team of craftsmen and women, has designed and hand-made the medals for the Glasgow 2014 Games. 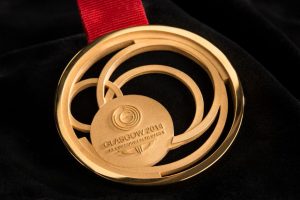 Inspired by circular movements in sport, they decided to give up the traditional two-sided circular solid blocks with engravings on both sides and move on to creating an outer ring with circles inside forming an object with different layers and spaces in the inner part. Launched with 100 days to go to the Games, Boyd explained his design in this official video Creating the Commonwealth Medals

The contrast between a rough cast of sandblasted film and a high-mirror polished edge catches the lights in different ways and moves from a design of a solid block of metal to an artistic way of expressing the sporting achievement of the Commonwealth athletes that also reflects the industrial heritage and ship-building traditions of the city of Glasgow.

What is interesting about the design and creation of each of the medals is that the designers used a high-quality jewellery 3D printer to create the writings on the medals and the G-shaped symbol of the Glasgow 2014 Games. Each of the medals takes about 3 days to make and its finish is different because of the manual labour involved.

So, to recap, the Commonwealth Games’ medals have changed in recent years and their design has moved away from the traditional representation of victory medals to adopt more artistic features customised to reflect the history and cultural heritage of each host- country/city. Different from any other time the Games were held in the UK, the Glasgow Games offer an innovative and artistic design for their victory medals without displaying the traditional royal symbols associated with Great Britain and the Commonwealth. Instead, they provide a glimpse of what the Glasgow 2014 organisers promise to be the most interesting and successful Commonwealth Games yet.