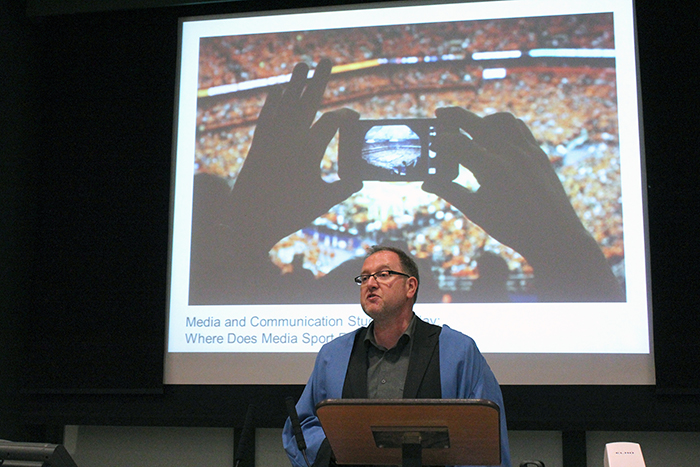 If there was anything I would say to describe my initial feelings, as I took my seat in Professor Richard Haynes’ inaugural lecture, it would be surprise. This was the first lecture of its kind I had attended since starting university, and to see a true professor in all his gowned-glory was an interesting factor.

However, it wasn’t that I was somehow awestruck by the way Professor Haynes’ gown flowed behind him. No. It was the number of lecturers, professors, and tutors who had turned out to his lecture on Media Sport. What this told me was that Professor Haynes was a highly valued academic. His opinion clearly counted a great deal to attract such a crowd.

The lecture was opened by Professor Neil Blain of the Communications, Media and 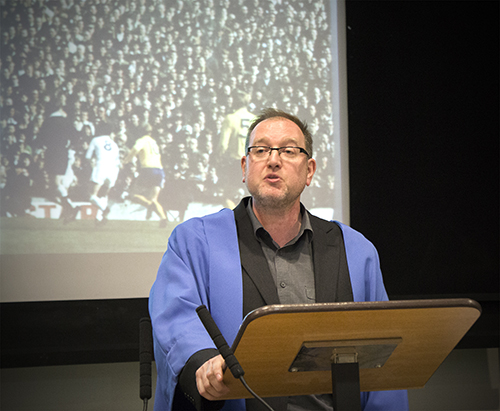 Culture division of Stirling, who provided a short introduction for Professor Haynes. His introduction provided the answer to why so many of my tutors and lectures had turned out: his academic portfolio and research is incredibly extensive into the effects of the media, in all its forms, on sport.

However, the only way to demonstrate this knowledge was to listen to the man himself.

Professor Haynes outlined how we would be looking into the impacts of media in sport, and sport’s relationship with meaning, money and power. 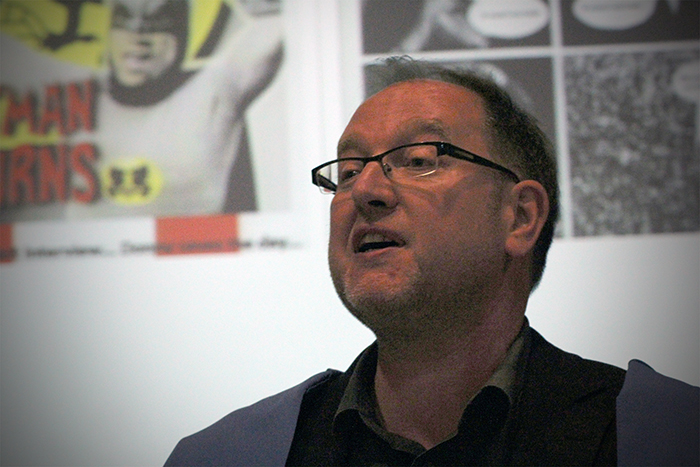 What I took from this lecture, however, was how across all social platforms and sectors of the media the role of the journalist is always developing and changing.

Professor Haynes opened the lecture with a quote from Hugh McLlvanney who writes: “…it is still possible to be assailed by doubts about whether [writing on sport] is a proper job for a grown person. But I console myself with the thought that it is easier to find a kind of truth in sport than it is, for example, in the activities covered by political of economic journalists. Sports truth may be simplistic, but it is not negligible”.

For me, this set the tone for the entire lecture.

Society has flipped. We are no longer seeing the top-down sort of relationship that has so long permeated the occupation of journalism. The idea that journalists are there to act as Gatekeepers of the news world, telling us what is worth knowing, is slowly crumbling. 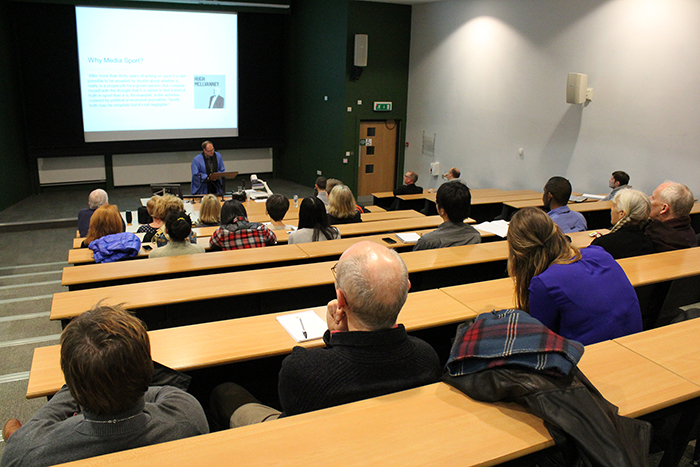 With the introduction of blogging, the unstoppable rise in social media, and, as Professor  Haynes spoke of as his research interest following his graduation, the rise of ‘fanzines’, we are witnessing the continuous empowerment of the consumers.

From consumers, to users, to producers.

This early example of football fanzines came in the form of the Leyton Orient and Liverpool’s The End – whose legacy is said to have “inspired a generation” – to name but a few. “They mushroomed”, as Professor Haynes detailed, “in the mid-80s, late 80s, and into the 90s, as the disasters at Heysel, Bradford and Hillsborough propelled fans to defend their sport”. 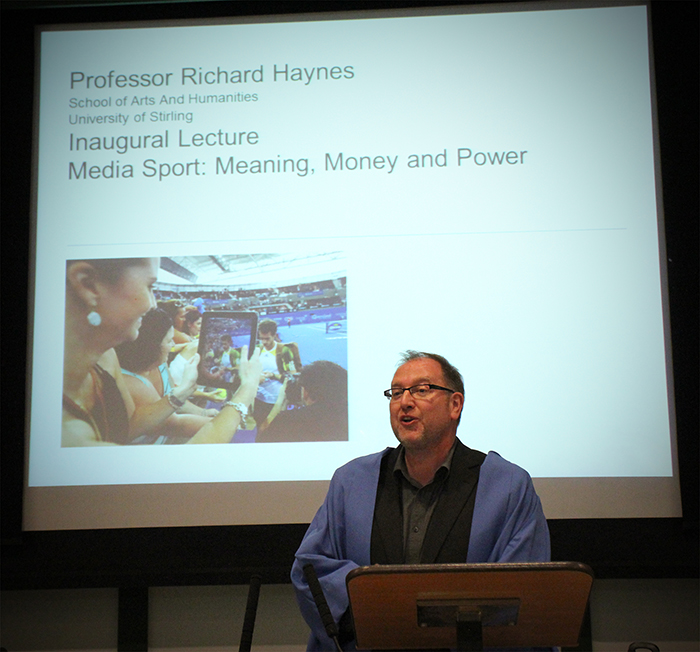 This just shows how, even in the 80s, citizens were taking hold of the means of production and using them to defend their sport from the criticisms of politicians like Thatcher. It’s not a recent phenomenon.

Social media has broken down the barriers that once stood between football fans and their sporting icons. We can now go onto Cristiano Ronaldo’s Twitter page; visit Andy Murray’s Facebook and see his “April Fool” about announcing his new coach; gather the news from the sources themselves – a right once reserved only to the journalist.

So the picture looks relatively bleak for journalists in today’s world of citizen journalism. The industry appears to be in a little disarray as the world becomes increasingly more complex and less easy to tie down. Should we, as journalist academics and students, simply give up? Is this the end of our profession?

“Not so fast”, says Professor Haynes. To conclude his lecture he returns to McLlvanney’s initial question: is sports journalism really an occupation for a grown person? The answer: yes. 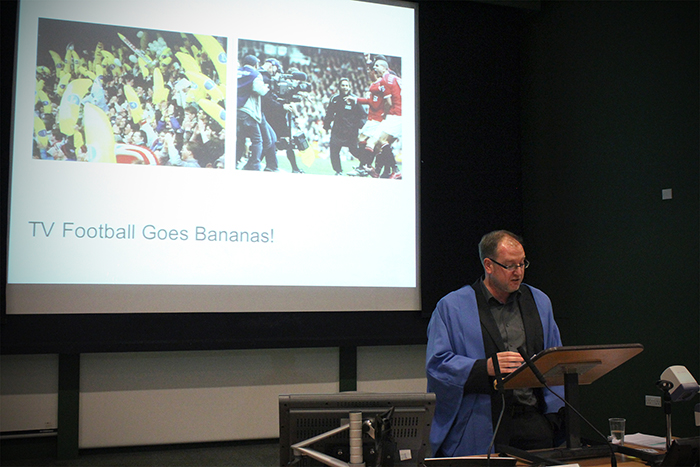 Professor Haynes lists three roles still required of the contemporary sports journalist: to add value to information fans already know; respond to “information flows that are fast, virulent and noisy”, and to “confirm or debunk” the rumours within sport.

The lecture showed just how complex the sporting world is. Journalists must be there to negotiate sport power; hold those with power to account; ensure that sport remains focused on human endeavour, and respond to the increasingly commercialised nature of sport.

But this does not mean that citizens should ditch the tools that they have gained via these new mediums. What citizens must do is add to the journalistic process. The more voices there are in sports journalism and journalism generally, the more the occupation can meet the demands of its democratic duty to society.

Therefore, the whistle, as Professor Haynes showed, has not yet been blown for either camp. Journalists need citizens; citizens need journalists. We require each other to develop our knowledge, hold the powerful to account, and further our enjoyment for the passions we hold in industries such as sport.

Here are just some of the thoughts of those who attended the lecture:

“A hugely enjoyable lecture from Richard.  His passion for the subject shone through, and I thought it was thought-provoking and inspiring.  Loved clips as well!” – Suzy Angus

“A wonderful meander through the rise of professional sport as Richard kept us entranced with archive material peppered with his own personal  recollections.” – Janieann McCracken

“It was a highly interesting and entertaining lecture that managed to engage a very diverse audience. It showcased Professor Haynes’s status as a leading figure in the field of media sport – I feel very privileged to have him as a colleague!” – Katharina Lindner

“Prof Richard Haynes’ Inaugural Lecture was an entertaining and informative look through the kinds of imaginative cultural research that we all tend to admire in the fields of media and cultural studies. He engages sports culture using traditional theoretical frameworks of mass audience and culture, through fandom, and towards innovations in technology. Additionally, Haynes draws from perspectives which are thoroughly embedded in community experience and historical engagement, and therefore speak to a host of historical socio-cultural issues that have shaped the language and landscape of sport today. Haynes’ delivery is a masterclass in thorough, honest scholarship. In fact, it’s little wonder that his work is taught in HEIs around the UK and beyond. “  – Greg Singh

“Richard Haynes¹s knowledge of and enthusiasm for his subject is woven deep into his appreciation of the role that mediated sport plays in a democratic society. His lecture typified the man in drawing his audience into sharing the warmth of his engagement with a lifelong passion” – John Izod

“A very eloquent orator, Professor Haynes managed to illustrate sport commercialization and its relationship with the media in a professional and thought-provoking manner. His talk was serious and of high academic value reflecting the complexity of the issue he is so passionate about, yet he managed to effectively convey his ideas in a way that was accessible to all.” – Damyan Kachulski

You can listen to Richard’s lecture in full here