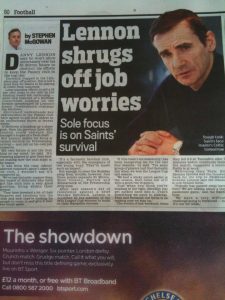 “What’s that? Work experience you say?” For student journalists, there’s nothing better to hear.

That’s why I was thrilled to secure myself a four-day placement last week as a sub-editor on the Sports Desk of the Scottish Daily Mail.

Based in Glasgow, this was my first time working for a national title. The welcome was warm and the office large – walking into it I immediately sensed the buzz of activity with the sport hacks typing away furiously to finish their stories.

Come 4pm, the team of subs came in to start their shift. I was introduced to the team (so many names!) and shown the system. Fortunately, I was familiar with parts of the system from my near four years of writing and editing with Stirling’s Brig Newspaper.

There were plenty of stories keeping the team busy during the week – the Scottish Cup ticket fiasco concerning Dundee United and the SFA, the on-going Rangers saga and of course live sport. This was where it got interesting.

A lot of the stories that are received by the Sports Desk are filtered through from the London office. It is then up to the Glasgow subs to arrange the pages to suit the Scottish paper and its readers. Coverage centred on David Moyes’ Manchester United and Jose Mourinho’s Chelsea who were both in Champions League action.

I was staring at my screen watching the first half reports from the journalist at Old Trafford and Stamford Bridge filter through. Then, as the game neared the end, a second half report was sent before the intro and ending were tidied up. Seeing this all happen made me really appreciate how much time pressure there is on the shoulders of journalists to produce copy that sports fans can read about the next morning over breakfast.

With the deadline close, there’s no time for anyone to grab a much needed coffee-boost.

All the while, the subs were frantically arranging layouts, altering pictures and praying.

Praying that there was to be no last minute action – an absolute nightmare scenario for all involved.

Thankfully, Moyes’ and Mourinho’s men were nice enough to produce rather comfortable results.

“Who’s clear?” These were the two words I heard most often in the Mail office.

The chief sub would shout out for one of us to look over the next article that was ready to be proofed before it could be filled away complete. A fast-paced but effective process.

I was very pleased to have a couple of my headlines featured in the paper. An interesting but frustrating job – there’s only so much space to go wild with alliteration!

My placement was thoroughly enjoyable and very valuable. Not only did I gain more knowledge of the editing process but I had work published in a national and hopefully have the chance now to gain further opportunities in Glasgow.

So when these opportunities come around fellow student journalists – just go for it!