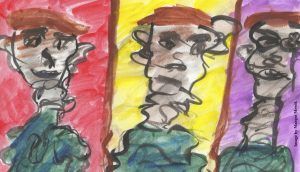 I   should begin by saying that, despite the conference title and theme drawing   on Deleuze’s work, the conference I attended wasn’t, in fact, a ‘Deleuze   conference’. This was pointed out to me by one of the conference organisers,   Dr Jennifer Barker (whose writing I very much admire and engage with   extensively in my own work), when I muttered something to the effect of “why can’t   we talk about the figure and figuration without obsessing over what Deleuze   had to say about it”.

This   was a considerable relief to me since Deleuze was not going to be found   anywhere in my conference paper – all the bodies I was going to discuss were   going to have organs! Thankfully, this turned out to be a surprisingly little   frowned-upon move and, certainly in the panel on ‘Resonance’ that I was   speaking on, there was clearly a sense of a renewed interest in the   materiality of the ‘lived’ body (in contexts as varied as drone visuality and   queer cinema).

More   generally, and across the various panels, there appeared to be an overarching   effort to integrate a range of different approaches to the ‘figure’   (including phenomenology, theories of affect, and various perspectives on   gender and race) in new and exciting ways, countering the sometimes perceived   incompatibility of these approaches.

Attending   this conference was an extremely inspiring experience, mainly because I had   the privilege of being surrounded by incredibly smart, creative and kind   people for three days of panels, screenings, plenaries and the odd drinks   reception.

There   was a thought-provoking sense of timeliness to the issues presented and   discussed at the conference, at a point when film philosophy is branching out   in a range of different and exciting directions.

I   am very grateful for the funding provided by the CMC Research Committee.