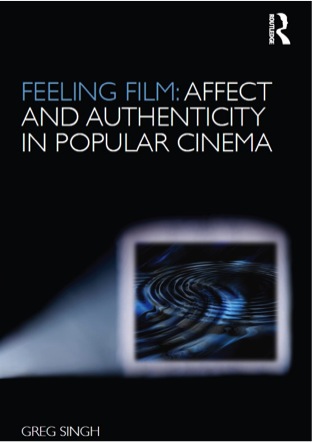 Cinema has the capacity to enflame our passions, to arouse our pity, to inspire our love. Indeed, my love of all things cinematic led me to write my latest book. Published last month by Routledge, Feeling Film: Affect and Authenticity in Popular Cinema is a book that examines the emotional encounters found in contemporary popular cinema cultures. During the course of the book, I discuss examples from a variety of popular film genres and embark on a journey that takes the reader from melodrama to film noir, via comic book franchises, cult indie movies and romantic comedy, to the very latest offerings of the Frat Pack cycle of films in Hollywood.

Very much inspired by fellow Jungian-oriented film critics, such as CMC’s own Emeritus Professor, John Izod, I consider various kinds of feelings engendered by our everyday engagements with cinema, within the context of a Jungian-informed psychology and contemporary movements in film-philosophy. This was important to me, because, as a member of a growing number of younger researchers working with depth psychology as a means to further the understanding of emotional encounters in popular culture, I wanted to build upon earlier work and contribute something that while fresh and contemporary, maintained a critical dialogue with more established scholars such as Izod, Luke Hockley, Chris Hauke and Don Fredericksen.

The aim of my book, building on and significantly developing my previous work published by Routledge (such as the Film After Jung book I published in 2009) is to question the popular idea of what cinema is from a psychological perspective, and to consider what happens during the anticipation and act of watching a movie, through to the act of sharing our feelings about them, reviewing films we’ve watched, and what makes some people go back and watch their favourite films time and again. Feeling Film does this through a critique of conventional textual analysis, instead offering a way of thinking about cinema which emphasises lived, warm (embodied and inhabited) psychological relationships between the viewer and the viewed. The aim is, if you like, to give the rather clinical worlds of psychotherapy and film studies a more human face – something that the reader can relate to in trying to gain further understanding of their own emotional attachments to the things they consume in everyday life – things that we, in the ordinary business of living our lives, love to do and share. Popular cinema culture, aside from being one of the few remaining mass entertainment economies, forms such an important part of this everyday emotional work that I thought it was high time such a book was written. Hopefully, some of my own feelings about what cinema is and what it can potentially offer will, in some modest way, inspire in others the same love of all things cinematic.

Feeling Film: Affect, Authenticity and Popular Cinema (2014) is published by Routledge. It is available to order now.