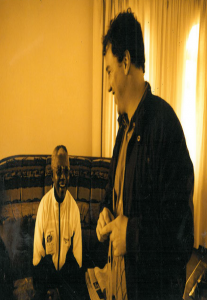 On August 4th, 1981, Glasgow became the first city in the world to bestow the freedom of the city to Nelson Mandela. In its time, this was a bold statement.

In many parts of the globe, including the UK, public sentiment was not very favourable towards the man who hadn’t been seen in public life for almost 20 years. Lucky to escape the hangman’s noose, Mandela was imprisoned for life in a Pretoria courtroom on charges of terrorism in 1964.

After his conviction, he was immediately shipped back to the terrifyingly harsh Robben Island prison where he chopped rocks with a hammer in the harsh sun for most of the next two decades.

Here, in the UK, Margaret Thatcher had only been in power for a year or two by 1981 and quickly lost interest in the plight of Mandela and the liberation movement he led. Supported by US President Ronald Reagan and by the interests of global big business, she quashed efforts to impose economic sanctions on South Africa’s whites-only regime. Instead, she invited South African President PW Botha to visit the UK in 1984, encouraged trade and castigated Mandela’s beloved African National Congress (ANC) as “a typical terrorist organisation”.

So it was no mean feat for Glasgow to step forward in the early 1980s to publicly acknowledge the qualities of a man who, not too many years later, would be hailed as one of the world’s greatest leaders.

Glasgow’s recognition was extraordinarily prescient. Even among the senior leadership of the ANC at that time, it wasn’t widely known that Mandela, deep in the confines of his stone prison, had begun to work his magic.

As South Africa tipped into violent conflict and moved inexorably toward a race-based civil war, he secretly met with Botha’s emissaries, including the Minister of Justice Kobie Coetsee, and began to talk about the country’s future.

What sort of terms would be needed to bring about peace in South Africa? Who would negotiate such terms? What kind of model of democracy would be needed to shift the nation away from the brink of war and toward tolerance and justice?

Offered freedom on condition he eschewed violence, Mandela refused. Before the ANC would drop its weapons, he demanded certain guarantees including universal franchise, democratic government, the unbanning of political parties, the release of political prisoners and the end to racial segregation.

Holding out while these talks continued for many years came at considerable personal cost. He went on a prolonged hunger strike to improve conditions in the prison. His wife, Winnie Mandela, ran off the rails and they were divorced not long after his release. He was unable to attend the funeral of his eldest son, Thembi, killed in a car crash. And the deprivation he suffered on that small island in the Atlantic for more than 25 years can only really be appreciated if you make the two hour boat journey from Cape Town harbour to ‘the island’ and see for yourself.

Remarkably, Mandela managed to convince both the apartheid authorities and his own party leadership that there was a route through the barriers of hate and history toward freedom. By the early 1980s, Mandela had so won over his prison guards he was free to roam the island. By 1988 he had moved into a vacant prison warder’s house on the mainland. And on February 2 1990, after more than 10,000 days in jail, he walked free.

When I visited him a few years later, in the remote town of Qunu on the east coast of South Africa, he had painstakingly rebuilt an exact replica of that prison warder’s house and made it his home.

Outside, it was a rather ugly, face-brick bungalow set amid the green, rolling hills of the area known as the Transkei. He loved the house. It represented his first taste of freedom for 25 years. On the inside, the house thronged with the noises of his family, of his grandchildren, as they prepared excitedly for Christmas lunch.

It was Mandela’s first Christmas as the newly-elected president of South Africa and I felt very fortunate to have been invited. At the time I was the senior writer of a new newspaper, the Sunday Independent. As a political correspondent who covered his ascent from prisoner to president, I had enjoyed a front row seat of Mandela’s difficult but fascinating journey to power.

On that Christmas morning of 1994, he and I (and a handful of his security guards) wandered the pathways of his youth. He showed me the rock he had played on as a child, the cluster of huts where he had slept. We met simple country people, many on their way to feast on the slaughtered cow now turning over a fire in his garden. They raised their arms and called ‘Madiba’, his clan name, for Mandela was a Xhosa prince as well as a democrat. When he went to court expecting the death sentence in 1964, he went in his tribal robes and prince’s crown.

There are so many moments to recall in my time with Mandela, good and bad. I was a few feet away when he swore the presidential oath of office at the Union Buildings in Pretoria and the airforce fighter jets roared over our heads to salute their triumphant new commander. I was also in court when he filed for divorce. He was as grim and somber as one could be.

I recall how he joked that when he moved into his vacant office in the Presidency there wasn’t a single chair, pencil or phone left behind by his predecessor and fellow Nobel peace prize laureate, Mr FW De Klerk.

There were challenges to the press corps when covering such a man. He was adored and celebrated. He could do no wrong. This was not a journalism we were used to. Where was the scandal? The mistakes? The complacency of power? He would call on the phone to chat and laugh about the stuffy ambassador he’d just met or give some background on the press conference that would be called in the morning. He was totally disarming, as almost all who came to his world, friend and foe, soon realised.

He would have been the first to admit he wasn’t perfect. I learned this the hard way. One day he took off his reading glasses during a speech and announced that everyone over the age of 13 would get to vote in the next election. Sensation! We rushed to file our stories. The next morning, front page leads were laden with banner headlines and gaudy editorials.

Alas, this was just a spur-of-the-moment idea, a “Mandela-ism” as they became known to us in the corps. It had not even been discussed by the ANC who soon smilingly discarded the crazy notion into the dustbin of history. We learned our lesson. When he took off his glasses and moved off the prepared script, we put down our pens and notebooks.

He was also prone to the odd temper and on one occasion – the aftermath of the infamous Boipatong massacre – literally shouted at and abused his counterpart, De Klerk, in public.

The challenges he faced in rebuilding South Africa after 300 years of colonialism and apartheid were also truly overwhelming. He presided over more than 500 Acts of Parliament in his first and only presidential term, many fundamentally rebuilding the country’s governmental and social structure.

It will take many more years before the normalcy he dreamed off is achieved or the equality and development he yearned for will be realised.

Perhaps what Mandela is best known for, his greatest gift, was his capacity to forgive. He suffered greatly, beyond comprehension at times, but was able to win the admiration, trust and cooperation of his fiercest adversaries. He was a man of great principle, never compromising on his need to sound out opinion and decide things collectively.

Mandela learned true democracy at the fireside in an African village as he listened to the elders, including his father, debate and argue the issues of the day: All were listened to, all respected. If some opposed the way forward, the discussion was put off to another day. Only decisions that gained the support of all were adopted.

His roots and his beliefs are a reminder that democratic values form part and parcel of the ancient fabric of human life, going back to the earliest of times. Over the centuries, many have sacrificed their lives for such values and many more have blossomed in their light.

Scotland is part of this journey. Here too we ponder the true meaning and future of democracy. Here too we see a fork in the road ahead and wonder which way is the right one.

Mandela has now gone, but his legacy will endure. He was truly a great man, and it is to Glasgow’s credit, that it was the first city to say so.