Maggie Laidlaw, from Stirling to Glasgow School of Art 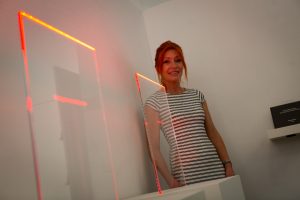 It’s hard to believe it’s been a full year since I sat writing about my T.A. Dunn Award received from Stirling University’s FMJ dept in 2012…but here I sit, again writing about another very unexpected award.

I studied at Stirling University’s dept of Film, Media and Journalism for one year during 2011-2012.  An honours year had been set up in partnership with Forth Valley College and offered to qualifying students from FVC’s Department of Creative Industries, and I was one of the first students to access the course.

The encouragement and enthusiastic welcome I received from lecturers within the university’s FMJ department was inspiring and I loved every minute of my time spent at Stirling. The modules and lecturers pushed me; forcing me to look at, and think critically about my areas of interest, and following my success at Stirling, and with the encouragement from two particular lecturers, I made the decision to apply for a Master of Research Degree at the Glasgow School of Art.

For those outside of the ‘art-world’, The Glasgow School of Art is a big deal for art students. To be accepted into this institution is a dream often considered as being beyond reach, and I whole heartedly believe that I would not have been accepted, nor (perhaps more importantly) had the courage to apply to GSA without the inspiration I found during my time at Stirling University’s Dept of Film, Media and Journalism. The progress I made during my one year at Stirling was immense. My time spent there allowed me to understand the benefits of academic research and how I could combine these skills with my own studio practice.

Learning to look more deeply and lifting up a few more layers is important as a skill but with it comes an ethical responsibility of knowing when that knowledge should be shared, or who it should be shared with. We often shy away from asking questions or confronting issues about our society or culture, wondering ‘who am I to ask such questions’, but as an artist I feel a responsibility to ask questions;  to look at my environment critically and have the courage to confront issues. So, that is what I spent my year at Glasgow School of Art doing.

The MRes in Creative Practices as a course is dynamic and intense: combing the rigorous traditions of academic research with the autonomy of creative practices. The course culminates in a final research project – a bit like a forth year dissertation, only more intense. Being situated within an art school, one is given the opportunity to present their findings as a full written thesis or combined with a portfolio of work or finished artwork. The creative aspect of the research (as suggested in the title of the course) is not only to be found within project findings or finished art work but also the ways in which information can be gathered and questions worked through.

In similarity to my successful year-end at Stirling University, my MRes project artwork was presented with a special award for work that was “deeply moving, broke down barriers and reached into the heart of the community” (Tom Brady, SPIE, at GSA Graduate Degree Show, 2013).

After just over 11 years of part-time and full time study I did think that my years of study were over, but it seems that I still have questions to answer… maybe even more questions than I had before, so it looks my next move is to PhD next September….

I’d better get started on that proposal….

(The following is taken from an explanation of my research work showcased at The Lighthouse, Glasgow.)

“This research project focuses on the language that permeates throughout women’s experiences of street sexual harassment from the ordinary spoken words of women’s everyday direct encounters, to the discussion of these issues in academic, feminist discourse. From such language, a book of poems emerged, authored by myself but inspired by the words of the women who gave their trust to be part of this work. Alongside these poems is a sculptural piece; a work made in glass, a material that undergoes a metamorphosis from a volatile combination of sand and heat in order to reach an inert, intractable, solid matter. Inscribed on the glass are words that have been inspired and spoken by the women, and while the material’s refractory qualities reveals the purposeful, public nature of this language, its transparency also reflects the vulnerability of these words, normally only spoken discreetly within the domestic sphere. In its sculptural form, glass represents these opposing but related worlds of public and private, open and hidden. Real words – language – etched on its brilliant surface. The glass can be fragile but it is its inherent, tangible durability here that interrupts the silence.”